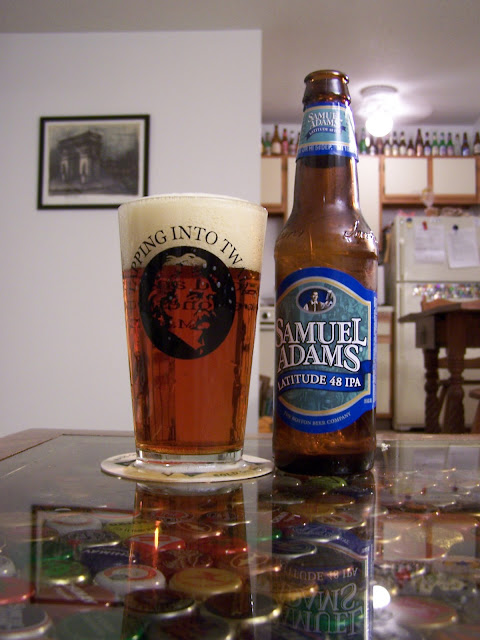 Samuel Adams - Latitude 48 IPA
Purchased From: Harvest Fine Wines & Spirits
Serving Type: 12 oz. bottle, poured into a Tapping Into Twain pint glass
Latitude 48 IPA comes with an interesting story. The beer is hopped using hops from the US, England, and Germany the supposed “hop belt” of the northern hemisphere stretching across the 48th parallel north. They do disclose the fact that the hops come from areas ‘close to’ the 48th parallel, which is good, considering the south of England is actually closer to the 51st.
Bickering aside, the Latitude 48 IPA is a solid beer and differs from the Samuel Adams Pale Ale. It not only packs an extra hoppy punch (to be expected from an IPA over an English-style Pale Ale), but it also has a more differentiated flavor. I’ve always thought that there’s a slightly off-putting similarity between the bulk of the Boston Beer Company’s beers.
Latitude 48 pours with a crystal clear copper tone with bright orange highlights. Massive carbonation bubbles make up the head that has some serious staying power and leaves huge lacing. The nose is somewhat faint with a musty tinge and a citrus aroma.
The hops make up the bulk of the body of the beer with moderate underlying malts. The beer seems fresh and the finish is crisp, but the flavor fades fast. There’s only a lingering dryness that remains soon after each sip.
Final Verdict: B-
Posted by Musings on Beer at 4:00 PM