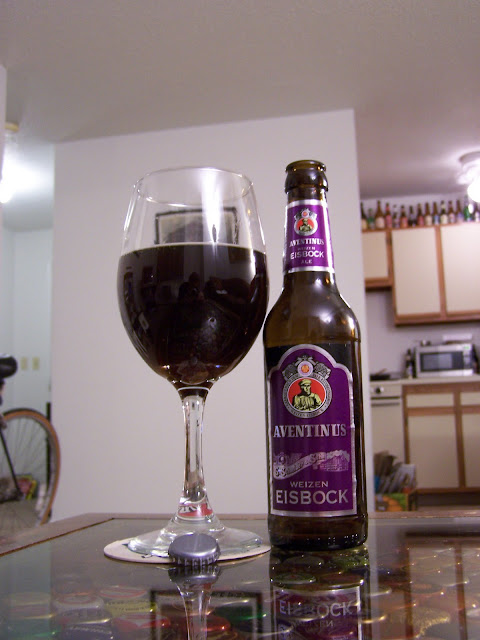 G. Schneider & Sohn - Aventinus Weizen-Eisbock
Purchased From: Wallingford Wine & Spirit Company
Serving Type: 11.2 oz. bottle, poured into a large wine glass*
This is an Eisbock version of the incredible Aventinus that I reviewed late last week. An Eisbock is a special type of beer, allegedly discovered accidentally by a former brewer of Aventinus, derived by the freezing of a portion of the beer. Because water freezes before alcohol, the water portion is frozen and removed. What is left is a considerably more concentrated version of the original brew.
Aventinus Eisbock pours with an initially large dark foam head, but it quickly disappears leaving no trace of its previous existence. On the way out, the head flares out with tons of crackling carbonation. Likewise, there’s no lacing to be found with this beer. The nose is incredibly sweet. Sweet. There’s an aroma of candied plums and hints of red wine and a Port character.
The deep brown body with some floating yeast begins with a dry and musty flavor, but quickly moves into dark fruits like dates and raisins. There’s also a prominent and deliberate nut component. The flavors of walnuts and hazelnuts are the most clear and add considerable depth to this complex beer.
There are only mild alcoholic esters, but the incredible sweetness of this beer is a clear indication of its considerable alcohol content. The nutty finish lingers in the aftertaste and allows the alcohol to sneak up on you. At 12% ABV this beer is quite serious, and not something you’re going to drink more than one of.
Final Verdict: A**
*A Note on Glass Selection: More commonly you’d find this type of beer poured into a snifter, the type of glass most commonly associated with brandy drinking. Unfortunately, I don’t have one. An oversized wine glass can be used as a substitute, that’s what I’ve done here. Other possible selections for this beer may have been a fluted glass, or a tulip. Because of the complex aroma of this beer, I wanted to go with something more likely to concentrate the nose. As its getting to the season where strong beers are most commonly drunk, I’ll look into adding a snifter to my cabinet.
**A Note on My Rating: This beer fully deserves the rating I gave it, but for factors different than the A I gave to the regular Aventinus. Aventinus is both bold and drinkable. It’s strong and full-bodied, but is easily drinkable, a combo that lends to an excellent beer. Aventinus Eisbock, while quite enjoyable, is not what you’d call “drinkable.” This is an occasion of a beer, not something to stock your refrigerator with. The beers take very different approaches, but are equally deserving of high marks.
Posted by Musings on Beer at 1:15 AM