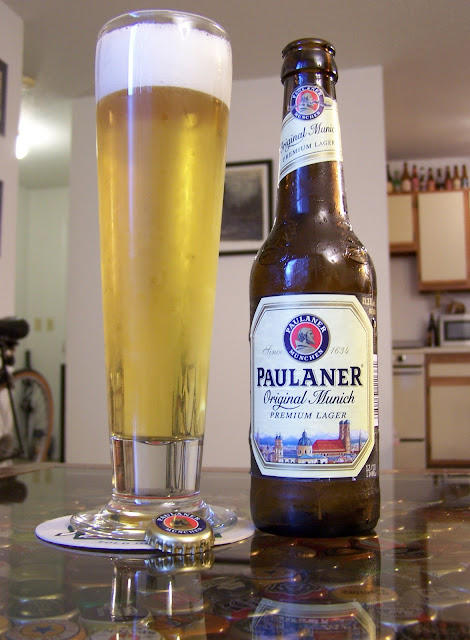 Paulaner - Original Munich Premium Lager
Purchased From: Harvest Fine Wines & Spirits
Serving Type: 11.2 oz. bottled, poured into a flute glass
Paulaner has no qualms about reminding you that they’re a German brewer, that they’re from Munich, that what you’re about to crack open is ‘authentic,’ and that they’ve got serious roots in brewing tradition. It’s all true. But, make no mistake, the date that they include on the label, 1634, is not about the brewery or the recipe of the beer you’re about to drink. The date is linked to the history of brewing by an order of monks, from which today’s brewer takes its name.
My hesitance about the marketing angle in play aside, this is a solidly done Munich Helles lager. If you’re familiar with Czech-brewed pilsners, like Pilsner Urquell or Budvar (relegated to the title of Czechvar in the states, due to a spat with Budweiser, which actually takes its name from the Czech beer that it falls, exceedingly short, in imitating), you’ll see a significant connection with this beer, or any of the style that you try. The Munich Helles lager is a German interpretation, with some modifications, of the traditional Czech pilsner style.
The beer pours a crystal clear medium straw body, with fine carbonation. The head pours large initially, but shirks with time. It leaves minor lacing on the glass. The nose of the beer is delicate with a deliberate sense of the malt embodied within.
The malts are clear, but they strike a balance with the hop spice character of the beer. When compared to a pilsner, you’ll notice a striking similarity in the hop selection. However, the hop notes are less powerful in the pilsner’s Munich cousin. The beer provides a crisp and clean finish. It’s a true lager. Compare this to any mass-market American counterpart, and you’ll understand exactly what’s lacking domestically.
Posted by Musings on Beer at 4:00 PM