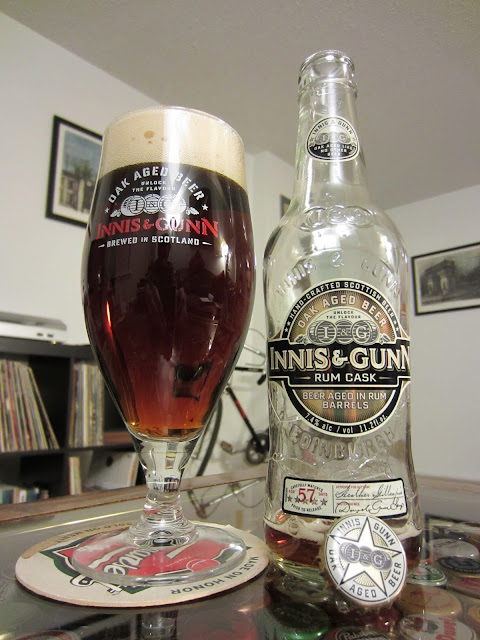 One of the last times I left off on posting I was right in the middle of reviewing a sample pack of beers from Innis & Gunn. Now that I'm trying to get some posting going again, it is time to pick up with the Rum Cask aged offering. The beer pours a lightly rubied mahogany with a striking clarity and glow. The head is a medium-large off-white foam with a lightly tanned tinge. The foam is light and airy and musters a moderate retention and lacing.

Rum is obvious on the nose with tons of vanilla and oak influence also present. Very minor licorice sneaks in at the edges and adds a light punch to a healthy malt aroma with light sugar and a modest alcoholic infusion. The sweet maltiness of a Scottish ale is apparent, but like the standard cask aged Innis & Gunn, barrel flavor dominates the palate. Sweet woody oak and dry vanilla flavors are clearly imparted from the barrel and dark rum influence brings layers of spiciness and a light fruit flavor.

The mouthfeel is slick with a tinge of carbonation on the finish. Huge rum notes carry through to the aftertaste and a hint of heat fills the back of the palate and the chest. Overall a tasty and enjoyable beer, which brings dominant barrel flavor to a solid malty beer.