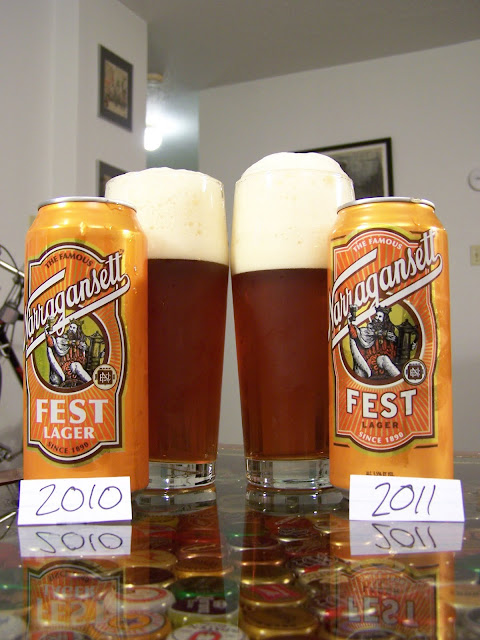 During my quest to collect all of the Narragansett beer varieties I inevitably had some prior season beers in my refrigerator and as a result I decided to do a head-to-head comparison of the 2010 and 2011 Fest Lagers. While an interesting experiment, normal gravity lagers have 'Best by' dates for a reason. While some new flavors developed, some of the best characteristics of a fresh Fest Lager were lost.

The 2010 Fest poured a deep muted amber with a mild diffuse glow, quite hazed after one year, while the fresh 2011 pours a shining amber with distinctive glowing orange and ruby hints. Both beers produced a large, craterous, light tan head, although the 2010 was slightly darker and speckled, both had solid retention. Lacing on the 2011 Fest was moderate, while the 2010 was fairly light.

A year in the can let the hop character of the older Fest dissipate a bit, leaving a malt-forward nose with a defined sweetness of broken down sugars. The 2011's nose was quite lagery with a cellar must and a mild vegetable aroma. Caramel malt sweetness was present with a light dusting of hops.

The 2010 was very sweet up front and lightly sugary, compared with a mild and relaxed caramel sweetness and lightly toasted biscuity malts on the 2011. What I took for a moderate earthiness on the fresh Fest seems to have developed into a mild nuttiness with accents of candied Winter fruits after a year's sit. The nuance of flavor provided by lightly bitter hops was all but gone in the 2010, while the fresh can featured mild, but overall tight hops that produced a dash of bitterness. Carbonation was modest overall on both, but not watery. Mild sweetness lingered on the finish of the 2011 Fest with a clear emphasis on the malts and a slight hint of vegetation. The sweetness was highly emphasized in the 2010 by comparison.

Final Verdict: Age beer that is intended to be aged. This head-to-head was an interesting experiment and not at all unpleasant, however, hands-down, the 2011 was more enjoyable than the 2010. This is an absolute testament to the importance of freshness dating. While the date isn't a drop-dead date by any stretch, it is an important reference when it comes to cellaring your beer.
Posted by Unknown at 1:00 PM