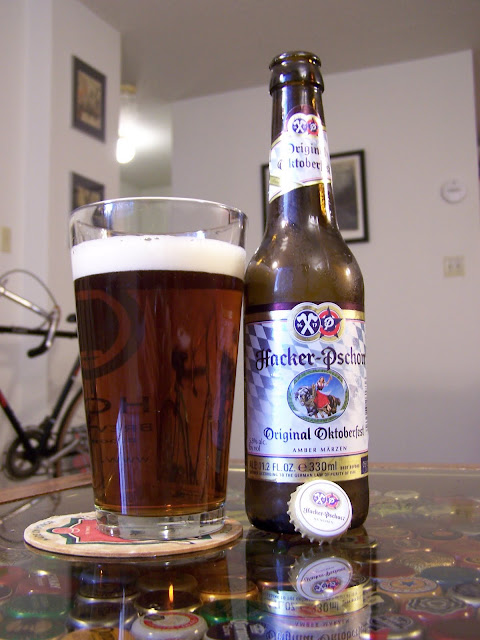 Hacker and Pschorr were separate breweries, with an intertwined history dating back to 1417, until the early 1970s. By 1975 the breweries were merged and the labeling and products were fully integrated. This storied brewery produces a range of traditional Bavarian brews, not the least of which is their classic Oktoberfest märzen.

The beer pours a tawny, brownish, amber body with some light highlights. The head is a medium sized tanned white foam of fine carbonation. The retention is fairly light and the lacing is modest. There's a distinct honey sweetness on the nose, mildly reminiscent of orange blossom honey. The light toasted malts have an earthy, lagered aroma.

The malts' earthy notes are pronounced up front with a slight woodiness and a classic lager aire. The mildly bitter hops are light overall. The malt body is not substantial, while the honey essence is significant and persistent. Although, the sweetness is never overblown. The beer is drinkable and light bodied with a lasting sweetness and mild hop dusting.