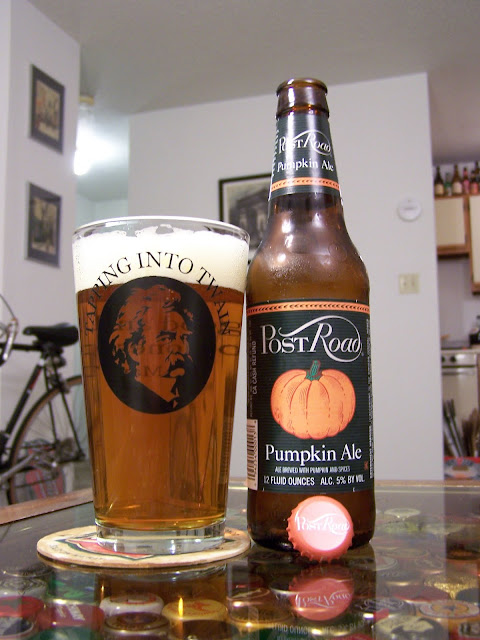 The Post Road Pumpkin Ale from Brooklyn Brewery pours a clear amber body with a medium-orange tint. The head is large, fluffy, and aerated, colored in off-white. The nose is very dusty and dry, reminds me of running a canister vacuum cleaner. It's highly spicy with light cinnamon, nutmeg and plenty of allspice. There's moderate underlying pumpkin. While the spices are on, this isn't a nose of pumpkin pie.

The beer is highly, highly spicy. Allspice dominates almost completely. Cinnamon is detectable as are notes of nutmeg. Light pumpkin blends nicely with the malted barley base, but it is absolutely secondary. Again, for pumpkin beer lovers seeking liquid pumpkin pie, this is not the right choice. While it's a pumpkin ale, I'd say it falls more in line with spice beers, if I've ever had one. The finish is dry and dusty and lingering.