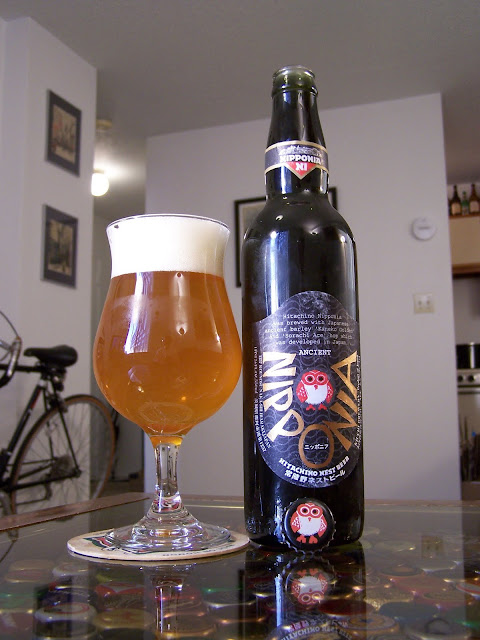 Ancient Nipponia is a limited release from the Japanese Kiuchi Brewery, which was unfortunately damaged in the recent disasters in Japan.* The beer comes in a very interesting deep green tinted 550 mL bottle. The Japanese take on a Belgian Pale Ale is very yellowy on the pour, but results in a glowing and radient gold beer. It is very hazy with floating yeast and a huge creamy off-white head with excellent retention. The nose is spicy with a light yeasty dust. Citrus notes are huge and give the beer a fruity and bright appeal. There's a nice even sweetness to round off the aroma.

The body seems initially thin, but a bit of aeration lends itself to a more full-bodied mouthfeel. There's a slight lagery character to the beer. Big honey sweetness defines the foretaste. The hop character is unique and gave me a lot of trouble in defining its qualities. The beer is brewed with the rare Sorachi hop varietal that seems present throughout. Notes of sweet rice with toasted sesame seeds lend this beer a squarely Japanese edge.

The hops carry through to the finish providing for a very interesting and unique finale. On the back end there's a slight banana character and perceptible Belgian saison-like qualities. The beer is tasty and extremely drinkable, but doesn't really seem like a true Belgian Pale Ale, it is, however, a very interesting take on the style. It's a bit too pricey for my tastes, but it is still worth checking out this limited release beer, if you can find a bottle.

*The brewery was damaged in the initial earthquake that struck Japan last month. However, it appear as if the damage was not too significant to shutter the facility. For the time being it looks as if exports of beer from the brewery are on hold. While in the stages of recovery, the brewery has taken to bottling water for those left displaced or otherwise affected by the disaster.
Posted by Unknown at 1:00 PM