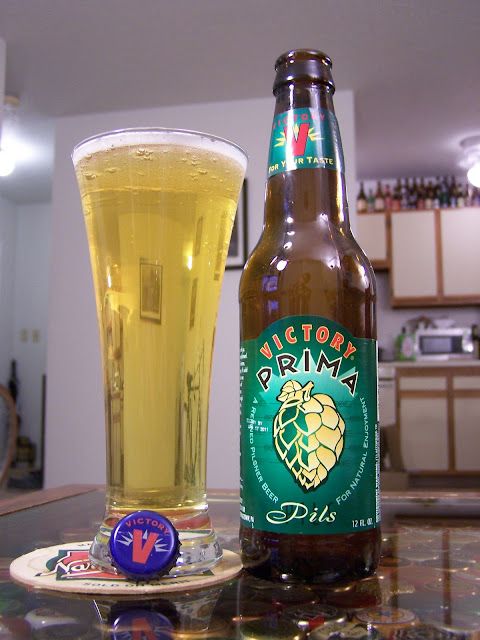 After the home run that was Storm King from Victory, it's shocking that it's taken essentially since the first week of this blog to try out another beer from the Pennsylvania brewer. Prima Pils pours a moderate straw body with a slight haze and a mild grassy green tint. The head is a thin white foam, but produces some great lacing around the top of the glass. More than expected from the initial appearance. The nose is very fresh with a classic pilsner malt character. There's a hint of tried and true Noble hop bitterness, but the hopping seems prominently herbal.

The carbonation ramps up nicely on the mouthfeel. The 2-row malts are almost a bit obscured, but they pervade nicely providing a refreshing malt grain background. The beer seems considerably hoppier than a typical German Pilsner, but it plays nicely. The finish is on spot with the characteristic dandelion bitterness and a dry, but clean finish. A great beer that makes me yearn for the warmer days of Spring that should be coming soon.

Final Verdict: A
Posted by Unknown at 1:00 PM