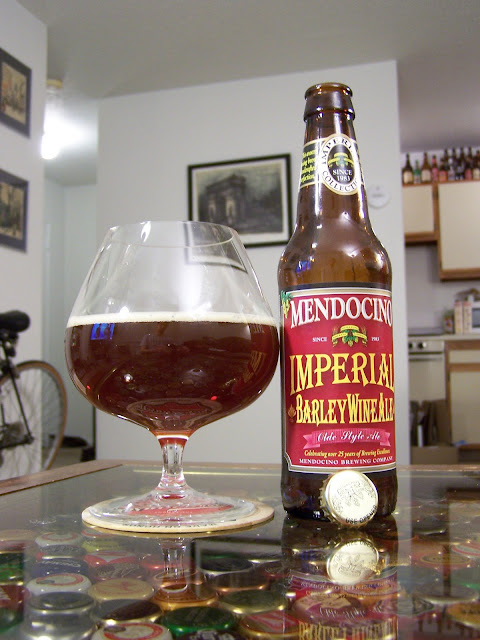 This California Barleywine comes from Mendocino Brewing Company, majority ownership in India, brewed in New York. Talk about a global concern. In fact, their Saratoga Springs brewery is responsible for one of the leading Indian-branded beers in America, King Fischer. It is no serious accomplishment, by any measure. Luckily, this beer, unlike its Indian-inspired cousin has a lot more going for it.

The beer pours a hazy, ruby-tinted, flat brown with a moderate glow when held to light. A vigorous pour produces only a modest head, of creamy consistency, in an off-white hue. The head disappears quickly, common among barleywines and other strong ales, and leaves no lacing on the glass. The nose is characterized by a piercing sweetness reminiscent of dates, with a light spice and a moderate alcohol burn.

The beer comes across a bit on the thinner side as far as mouthfeel goes. There are immediately noticeable layers of flavor. Almost acidic fresh grapes combine with cherries up front, but meld nicely with sugar-rich dark fruits like dates and figs on the mid-palate. As the finish approaches the beer dries out considerably. It develops a slightly gritty character and seems almost a bit salty. The finish is boozy, but is tempered considerably as the beer warms. Finally, the aftertaste arrives with an interesting, almost sour character.