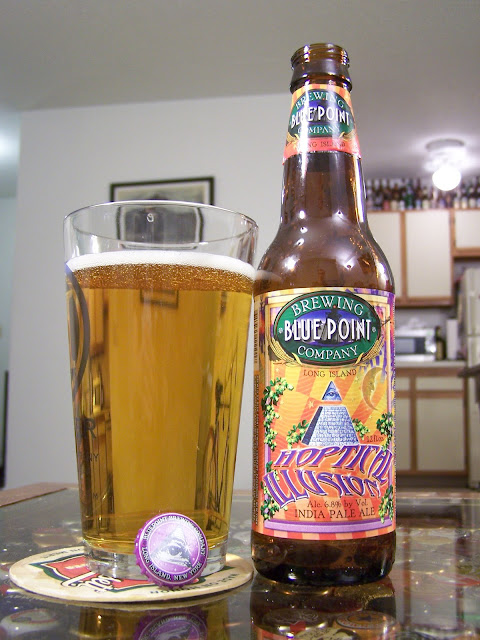 You can't usually tell the quality of a beer by it's name, but often it betrays at least some of the character of a brew. This seems often to be true with IPAs, which more often feature interesting and inventive names. For this, Hoptical Illusion can't be forgotten, bearing a playful name (which functions as a great pun) and it's matching, highly symbolic, label design. The beer pours a light straw body with moderate active carbonation and a head that borders on diminutive. The body is definitely lighter than many of the stronger IPAs out there.

The foam retention is modest with lacing to match. The nose comes though, lacking substantial strength, but with some praiseworthy depth. The hop aroma is clear with plenty of citrus notes. Hints of vanilla dance among the beer's underlying malty character. It comes across very crisp with an airy mouthfeel. Despite the light feeling, the beer is fruity with considerable bitter hops that come across with a distinctly aromatic edge. The malts are biscuity and work to temper the dry and lasting finish.

Final Verdict: B
Posted by Unknown at 1:00 PM