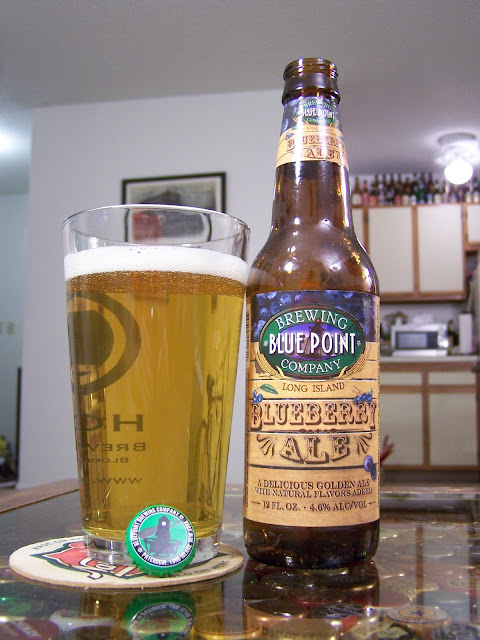 About a day before I reviewed this beer, when I was looking in the refrigerator to survey my reviewable beer supply, I noticed this bottle. While stocking up last week I grabbed two Blue Point beers that I hadn't had, not really paying attention to what I was grabbing. When I saw this bottle sitting there, I woed my decision. "Why did I buy another fruit beer?" Before reviewing it, I resolved myself to give it a fair shake. Reminding myself, there are good fruit beers out there. Why not this one?

The beer pours a light yellowy straw with a fizzy white head. The foam has a very slight bluish tint around the edges. The head retention and lacing are both minimal. Big blueberry nose. There's a very mild spice and a sweetness that reminds me of blueberry pie filling. There's a bit of artificial aroma, likening this more to a canned Musselman's filling rather than the real deal.

The malts are thin with high carbonation. Both pale in comparison to the standout blueberry. The beer is sweet, but not cloying. The blueberry is persistent, but luckily, it is somewhat understated. The artificial tinge steps in late, but isn't at the heights I've had in other flavored beers.

This is another beer I had some trouble giving a rating. To be honest, I didn't hate it, but I wouldn't drink it again if given almost any other option. The blueberry is marginally tasty, but why? The underlying beer seems like its been neglected (light and fizzy) and the blueberry doesn't work to make things better.

In terms of buzzwords, there's no synergy here. The complete beer should be greater than the sum of its parts. That's not the case. Each part is separate and middling. Together they're disjointed and the marriage borders on detrimental. They say that to truly love another, you must first love yourself. I guess the same applies for fruit beer.

The fruit should be enjoyable and distinct, and so should the beer. I'm not getting that from either. This of course, is not a problem unique to Blue Point's Blueberry Ale. This just happens to be the first time I'm really putting it all together. I heard a rule a week or two ago: Rule 1 - Don't fruit the beer. Rule 2 - Don't fruit the beer unless you know what you're doing.

My new rule? Stay away from fruit beers unless I've got a suspicion that the brewery might actually get it right.
Posted by Unknown at 1:00 PM