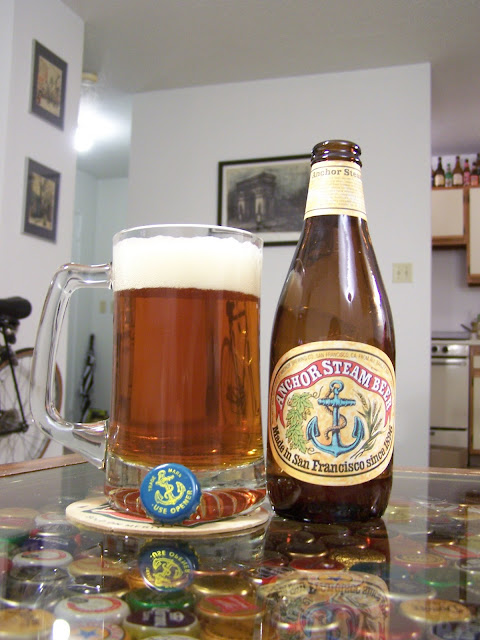 Suddenly I find myself three fourths of the way through an impromptu series of Anchor Brewing Co. beers. This one, perhaps their signature, is their Anchor Steam Beer. Recalling the seemingly lost style of 'steam beer' invented in San Francisco, I'm suspicious that this is the real deal. Although its name is suggestive, and Beer Advocate labels is as "California Common" / "Steam Beer," some of the wording on the label leads me to believe otherwise. I'm sure there's some truth to it, but because Anchor went to the effort to trademark the term, I have a feeling a lot of the motive is advertising. I'll leave that for the end of the post, though.

The beer pours a moderate coppery-amber body with a generous and fluffy yellow-tinted head. There's plenty of carbonation and the retention is significant. There's not a ton of lacing, but a small layer of foam sticks around for the entire life of the beer. The nose carries hints of mildly sour grain and a component of hops with an edge similar to that of the Noble variety.

Overall the beer is very malty and quite lagery. I really can't tell what might be going on here that sets this apart from any other (good) amber lager. The mouthfeel is airy and refreshing and a solid hop profile adds depth and character to the beer. However, overall there's not much extremely different or unique about it. Finally, a dry and hoppy aftertaste sneaks up nicely and persists nicely.

From the label (emphasis added): "Anchor Steam brand beer derives its unusual name from the 19th century when "steam" seems to have been a nickname for beer brewed on the West Coast of America under primitive conditions and without ice. The word 'steam' may have referred to the pressure of natural carbonation developing in the beers. Today the brewing methods of those days are a mystery, and for many decades Anchor along has used the quaint name 'steam' for its unique beer."
Posted by Unknown at 1:00 PM