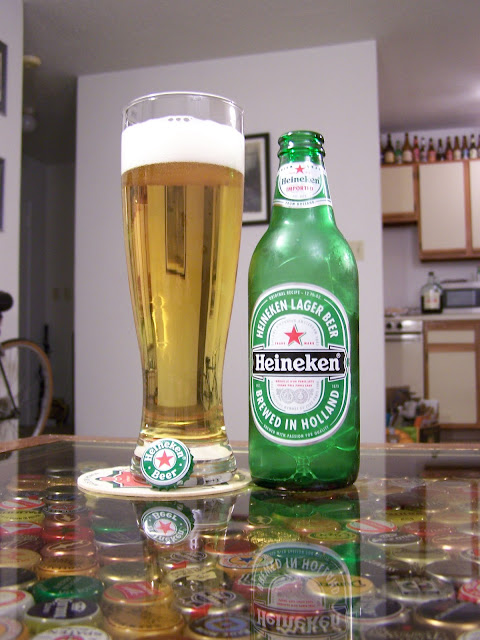 Heineken
Purchased From: Plumsted Buy Rite Liquors
Serving Type: 12 oz. green glass bottle, poured into a Pilsner glass
Heineken pours a medium-golden straw with a modest-sized wavy white foam head. There’s not a ton of visible carbonation, which I was a bit surprised by. The bubbles carry a slightly oily complexion and the head is slow to fade. There’s lacing present, but nothing spectacular. The nose is dominated primarily by sweet malts, but there is a vague Noble hop aroma.
The Pilsner-esque flavor is clear, with dandelion hints, but its not particularly bitter. They’ve definitely cut down on the bitterness to make this a more universally palatable import. There’s not much in the way of depth. The mouthfeel is silky and enjoyable overall. The finish is wet and comes with a lingering mild bitterness.
Overall Heineken is solid for a Euro Pale Lager. However, I tend to think the style as a whole is derivative and middling. Heineken is more of an exercise in marketing genius than a world-class beer. Many other Euro Pales could’ve easily been in Heineken’s place, but Madison Avenue happened to latch onto this brew specifically.
Final Verdict: B-
Posted by Musings on Beer at 4:00 PM