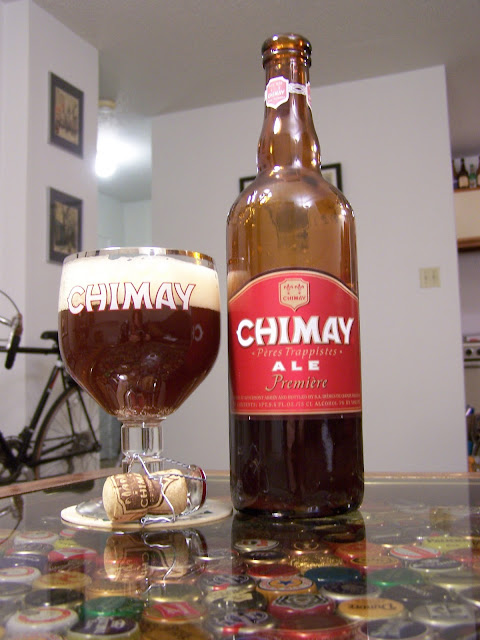 Chimay - Première (Red)
Purchased From: Canal’s Hamilton
Serving Type: 750 mL bottle with cork and cage, poured into a Chimay goblet
I’d like start with a series of anecdotes regarding my history with Chimay, a Trappist brewery located in Baileux (Chimay), Belgium because it’s likely that my story will show the light in which my impression of Chimay is colored, and I think disclosure is the best route to take. However, I’ll save that for the end of the review. It’s sure to be a bit lengthy and will delay the purpose of this post. I will say for now, though, that as biased as I may be, the beers by Chimay are undoubtedly world-class and receive the exclusive Authentic Trappist classification, held by only a few European breweries run by monks. They’re well worth tasting if you haven’t had them before.
Première is a Belgian Dubbel with a murky red-brown body. Yeast sediment floats freely through this unfiltered, unpasteurized beer. The large, airy yellowed-tan head crackles with carbonation and packs nice retention and a constantly refreshing center. The lacing is somewhat modest, but elegant still.
The sweet aromatic nose smells of fresh grapes, spicy alcohol and musty yeast. While the beer is robust, the mouthfeel remains light and crisp. The musty yeast component is clear in the flavor, but its backed up dutifully by a fruity sweetness like figs. Peppery spice and clove mellow out the sweetness and allow the crunchy and earthy malts to make a solid showing.
The finish is great and the pleasant aftertaste lingers nicely. On top of it all, the Chimay goblet and the custom bottle provide for great visual presentation. The tall bottle, sealed with a cork, features screen printed logos, a raised ‘Abbaye de Scourmont’ and a recently redesigned label. The labeling is nothing extraordinary, but looks a bit better than the previous design.
Final Verdict: A
Personal Anecdote: I first heard of Chimay when I was 18, well below US drinking age. What I heard was essentially that Chimay Grand Reserve (Blue) was extraordinarily good. Later, I heard that bottle-aged Chimay developed characteristics rare to beer and sometimes associated with Port wine. This was my first exposure to the notion of cellared beer.
The first day that I arrived in Cannes, France during my study abroad experience I set out to find Chimay. What I found, in a local supermarket, was a three-pack collectors’ set featuring the three primary styles of Chimay with a goblet (that’s the goblet that I poured this bottle of Première into). It was everything I had hoped.
A few weeks later, after moving to Paris, I went on an adventure to Belgium with a friend of mine. While visiting Brussels was awesome, my primary reasoning for the trip was to somehow get to Baileux. On our second day in Belgium we took a train south from Brussels to Charleroi. From Charleroi we took a bus to the nearest town to Baileux. When we arrived we saw several pubs with Chimay emblems posted above their doors. Shortly after breakfast time we wandered our way in. We each ordered a Chimay (delicious from the tap) and inquired about the abbey that produced it. The barkeep was delighted by our interest and assured us it was only a short drive farther South.
Fueled by lack of food and 9% ABV liquid courage we set out on a hike down the side of a highway. By days end we had visited the bottling company and took a look at the Abbey de Scourmont where the beer is brewed. After walking about 15km we returned to the very same pub with bottles of Chimay packed away in our backpacks. The proprietor remembered us and asked if we had made it to our destination. We assured him that we had but revealed that we had walked. He looked at us like we were crazy and served us two more freshly tapped Chimays.
Needless to say, I’m biased, but, it’s a great beer to be biased toward. Definitely check these brews out if you can.
Posted by Musings on Beer at 4:00 PM