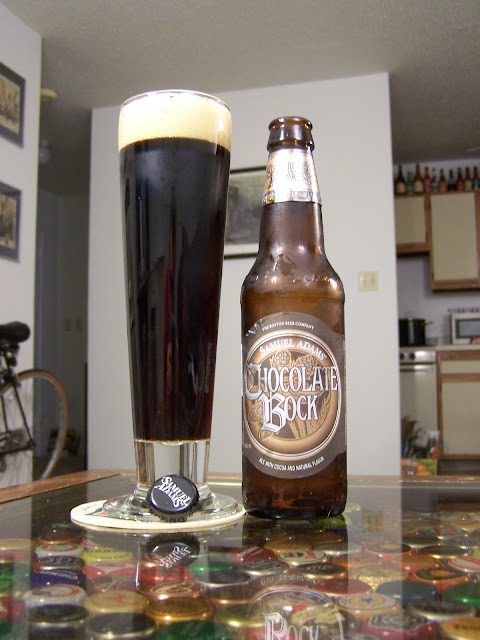 Samuel Adams - Chocolate Bock
Purchased From: Harvest Fine Wines & Spirits
Serving Type: 12 oz. bottle, poured into a flute
The Chocolate Bock has been around for quite some time, but always in “collectible” 750mL bottles with a metal emblem. The box makes it a point to note that this 12 oz. version is exclusive and new to the variety pack. The bottle and the box also explain that the beer is aged on a bed of Ecuadorian cocoa nibs. What’s a bit concerning is that in addition to being flavored with the cocoa the bottle reveals that the beer is also flavored with ‘natural flavoring.’ It’s a bit ambiguous as to what that is exactly, but even the seemingly innocent ‘natural flavoring’ can be code for all sorts of things that aren’t what you might expect.
The beer is extremely dark, but has a clean complexion. There’s a pleasant brown-ish glow emmenating from the base of the glass. The generously-sized tan head is creamy and comes with solid retention. As the foam shrinks a fine tan layer adorns the top of the beer.
Chocolate is at center-stage on the nose, but there’s also a more delicate mild must. Also detectable are thin barley malts, but they are in the backseat in this beer. The flavor of this beer is singularly and decidedly chocolate. It is extreme. It tastes like drinking a glass of chocolate milk or a mug of (now cold) hot cocoa. A slight bitter and smokey tinge comes at the end, but there’s not much else. No real malt flavor can be decerned. What this beer lacks in balance or depth it makes up for in chocolate.
Final Verdict: C+*
*A Note on the Score: I had a bit of trouble deciding on this score. The beer itself is delicious, but it’s a bit over the top. Nothing but chocolate really makes it through, and it comes off too rich. By the time I was about half-way through the glass I was ready to be done. It is certainly something worth trying, especially for chocolate lovers, and even for people who don’t like beer all that much. However, it loses points, for me, because this is a beer, not a chocolate shake.
Posted by Musings on Beer at 4:00 PM