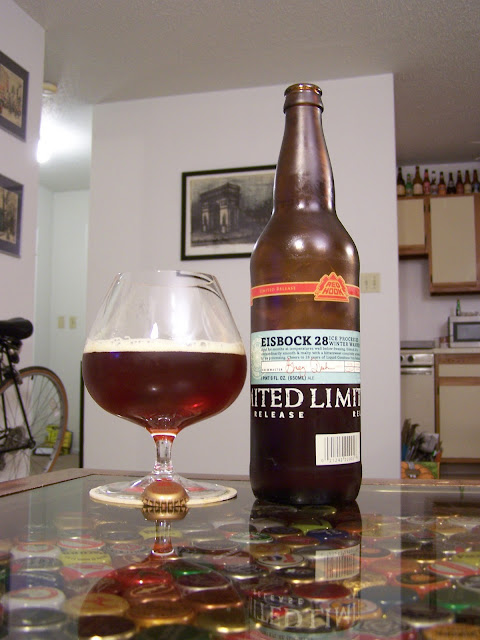 Redhook - Eisbock 28
Purchased From: Harvest Fine Wines & Spirits
Serving Type: 650 mL silk screened glass bottle, poured into a snifter
When I saw that Redhook had produced an Eisbock I was immediately interested. I was also pleasantly surprised to find that this 650 mL bottle was actually slightly cheaper than the 33 cL bottle of Aventinus Eisbock that I reviewed recently. My excitement was a bit dashed when I saw that someone commented that this was not a ‘true Eisbock.’
I did a bit of research and found out that it is, indeed, a ‘true Eisbock,’ albeit somewhat weak. The point of contention was that, in the United States, the style is illegal. The theory being that concentrating beer by ice is a form of distallation, and that brewers would have to be licensed as distillers and pay a separate (higher) tax. So it is natural that there’d be questions about it. Is Eisbock 28 illegal? Or, is Eisbock 28, not an Eisbock?
A bit of research into the TTB (formerly ATF, who knew?) reveals that a brewer can produce an Eisbock, but may remove only 0.5% of the water from the beer. Redhook has confirmed that they followed the TTB rules, but won’t divulge the amount of water that they froze off because that information is proprietary (notice the use of italics to denote snark). But, we know that the amount is at most 0.5%, which means that the concentration in Eisbock 28 is minimal at best. Damn these puritanical post-prohibition holdovers. Now to the goods.
From the beautiful and minimalistic silk screened bottle pours an equally eye-catching copper beer with a vibrant ruby glow. There’s a small tanned white head that fades but leaves intricate floating wisps. The nose is big on malts, but has a powerful underlying sweetness and alcohol. Candied fruits are clearly present with a mix of fresh and maraschino cherries.
The flavor is something else entirely. To be sure, it is unique, but the individual components are nearly impossible to discerne. Its bitter and dry, with a mild sweetness beneath it. I can also pick out a bit of oakiness, likely from the aging process. The mouthfeel is sticky and syrupy.
The beer hides its 11% ABV quite well and leaves with a mild heat in the chest. This is an interesting beer and fits in well with Redhook’s limited release series. While I do believe that this is a true Eisbock, I think its fairly weak as they go and lacks the depth and complexity that I was hoping for.
Final Verdict: B-
Posted by Musings on Beer at 4:00 PM