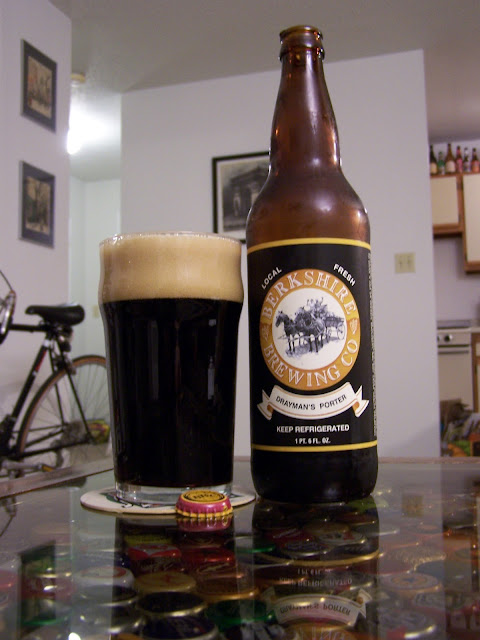 Berkshire Brewing Company - Drayman’s Porter
Purchased From: Harvest Fine Wines & Spirits
Serving Type: 22 oz. bottle, poured into a nonic pint glass
Drayman’s pours with a large tan head that has a creamy appearance and a mild oily sheen to the bubbles. It’s nearly black with only a burnt sienna glow at the base of the glass, when held to light. Massive chocolate and toffee on the nose.
There’s a light smoke to the beer but it primarily comes with tons of coffee and chocolate flavors. Caramel notes round out the beer and lend some extra sweetness. The hops are extremely light here, but there’s a slight bitterness to the beer from the roasted malts and smoke. The bittering, though, is far from prominent. The mouthfeel matches the head, and is quite creamy. The aftertaste has a mild char, but there’s a lingering sweetness. This beer is very drinkable!
Final Verdict: B+
Posted by Musings on Beer at 1:24 AM