Beers of the World - Rochester, NY 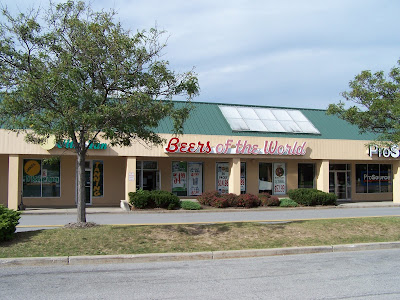 Beers of the World - Rochester, NY
I recently made a trip up to Rochester and Syracuse. While in Rochester I knew that I had to stop in at Beers of the World, which I had heard about from a few beer lovers that I know in the area. If you’re ever in Rochester, or nearby, you should make it a point to stop by. There’s only one problem. A single trip to the store is at once an amazing beer-shopping experience, and a soul-crushing disappointment. If you won’t have the ability to come back over and over again, you’ll have seen the incredible variety available, but you’ll know that you will never be able to try it all.
Beers of the World has an incredible selection of brews from all around the world, Europe, Asia, the Caribbean, South America, and North America (maybe more), including an extensive selection of American craft brews and mass-marketed fare. You’ll feel like a kid in a candy store wandering the helpfully labeled isles of this gem hidden in a strip-mall.
During my time in Rochester I purchased a number of single beers from Beers of the World, which you’ll be seeing in the coming week or two. At the time of writing this, I’ve already tasted and reviewed a few. This weekend you’ll see two more from my new local favorite beer store (Harvest Fine Wines and Spirits), then next week will see another handful from Beers of the World.
One last note: A hallmark of my college career was Keystone Light, a highly watery, seconds-quality version of Coors Light, sold in 30-packs for cheap. While at Beers of the World, I saw, for the first time ever, cases of Keystone (regular). From time to time I’d seen Keystone Ice cans littering the ground, but never regular Keystone. So, in the interest of the experience, I brought a case of it back to Hartford with me. I expect you might see one of those around here eventually too.
Posted by Musings on Beer at 8:03 PM